The Ku Klux Klan tried many things to prevent the blacks and republicans from voting. The KKK killed black political leaders and teachers to prevent people from supporting the black community. White republicans that were associate with the blacks were also killed and tortured. The Klan harassed , intimidated and even killed northern teachers, judges, politicians and "carpet baggers of allelic" (adl). " Since the Klan targeted Republicans in general, it did not limit its violence simply to black republicans, white republicans were also included" (wnd). The Klan liked scaring and even killing African Americans to intimidate  them not to vote.  "They would use intimidation and scare tactics such as cross burning in front of peoples homes. But they would also use acts of terrorism such as church burnings, kidnapping, beatings, possible deaths to  deter the African American from exercising their newly given freedom such as the right to vote (Helium). "I used terrorism, violence and lynching to intimidating and oppress  African Americans." (towncalled). The Democrats would not pass bills and veto bills that helped the black community. "White Democrats cast the full vote of the parish for grants opponent. The Klan killed and wounded 200 black, republicans, hunting them and chasing them through the woods. (towncalled). "No democrats voted for the 14th amendment to grant citizenship to former slaves." (wnd). 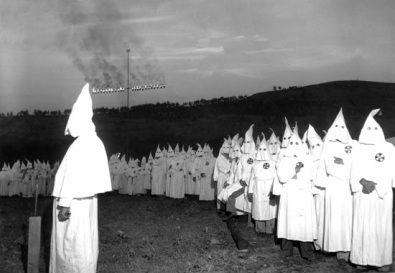